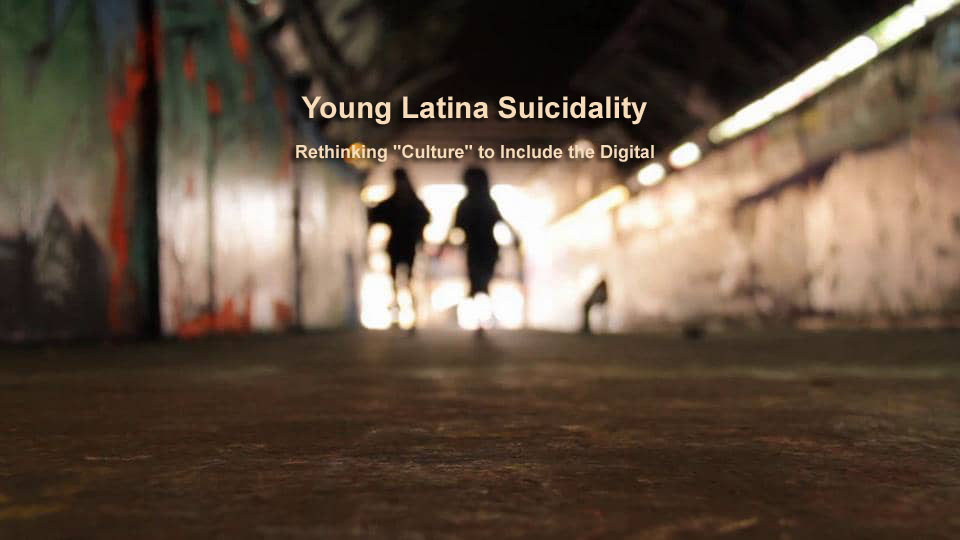 According to the Youth Risk Behavior Survey from 2005 to 2015, Latina adolescents reported higher levels of sadness and hopelessness, suicidal ideation, and suicidal attempts than white or Black girls of the same age. If we were to follow the widely accepted hypothesis of a continuum in suicidality, from death wishes to suicidal attempts and completed suicide, Latina adolescents would have higher levels of suicide than their counterparts. However, that is not the case. Young Latinas’ suicide rates are significantly lower than white female and slightly higher than Black female adolescents. The reasons behind the higher reports in ideations and attempts among Latina girls continues to be a mystery. Much of the current research points to the understanding of this phenomena from a cultural perspective. In this multimedia project, I question how Latino culture through the use of the acculturation construct is conceptualized as a localized, static group of cultural traits in most academic literature addressing Latinos’ mental health issues in general, and in particular young Latinas’ suicidal behaviors. I do agree with the idea that culture and self are in constant interplay and constitute each other. However, Latino culture in the US has not been created in a vacuum, and should not be understood as operating outside the context of the historical structural factors that condition the environment in which young Latinas live. The absence of historical and structural understanding weakens the explanatory power of culture to account for the totality of this baffling phenomenon. Clinicians, teachers, health providers, and other constituencies who are involved in supporting and promoting the emotional and psychological health of young Latinas will find in this site two things: an alternative to the way in which Latino culture is traditionally depicted in the mental health literature and a perspective which includes not only the cultural, but also the social, structural, and historical contexts. These connections are deemed necessary for continuing to broaden our understanding of the high levels of suicidal ideation and attempts by young Latinas, and more importantly, the understanding and promotion of their general welfare.

Indeed, this project’s overall purpose is to open up the conversations about young Latinas emotional well-being including their high level of suicidal ideations and behavior by bringing a diversity of perspectives, including young Latinas voices found online.

How to navigate this blog?

On this site, the conversations about Latina emotional and psychological well being, including their high level of suicidal ideations and behaviors, revolve around four main topics: immigration, culture/acculturation, young Latina identity, and the relationship between Latino mothers and their daughters. I approach these topics from various critical perspectives making it possible to deal with the complex issues of power differential, social location, identity, identity politics, and inequality in the context of Latinas’ emotional well-being.

With the exception of “some words of caution” and ‘between harm and hope,” each blogs is dedicated for the most part to one of the main topics. It is impossible, however, to isolate these issues from one another; they are all interconnected and mutually impacting.

Since summer 2016, I have been collecting digital information relevant to this project; that information is included on this site. These resources, which are intended for clinicians as well as for other people interested in the subject matter, are organized according to different criteria. There are over a hundred digital pieces, which you can access on the Resource menu where they are classified according to their relevance to the four main topics I describe above. This collection of digital information is also available in the CATEGORIES listing where individual pieces are classified according to a number of different subtopics, including media genre categories.

More about this project….

How this project was born?

After reading Dr. Luis Zayas –the main researchers in the subject– in which he proposes that “the suicide attempt [in young Latinas] represents a way of articulating emotional suffering in culturally meaningful ways” I began to wander. This proposition implies that suicidal attempts by young Latinas are to be understood within the social and cultural context in which they are found. Following this argument, I began to ask which culture context would Latina’s suicidal attempts be bound? Since we are talking about adolescents, what about identity formation? What about the interplay between acculturation and parenting? Would it make a difference if the young Latina who is contemplating suicide is a recent immigrant, first, second or third generation? What about structural factors such a socio-economic inequality, punitive immigration policies, and racialized legal system? Or about socio-historical ones such as colonialism? I had more questions than answer after reading Zayas’ cultural relativistic explanation, and these lingering questions became the fuel for this Multimedia project.

Questions addressed in this project

1) Based on self-representation projects authored by Latinas online, how is the issue of identity for young Latinas connected to their emotional well-being? From their point of view, what are the forces interfacing with their identity development?
2) What are some alternative frames we might use to better understand migration and acculturation that align with how young Latinas are seeing themselves in their worlds?
3) What are the emotional and structural forces underlying Latino family dynamics, specifically the mother-daughter relationship, which has been identified as an important factor in Latinas suicidality?

What is my approach?

Methodologically, I de-centered the voices of practitioners, academics, and other professionals by bringing the voices of young Latinas to the discussion on equal footing. I emphasize the importance of their voices and of their roles as the authors of their own experiences.
Using digital data – pieces of artistic expressions authored by young Latinas found on the internet- I am pushing the limits of the conversations about Latinas’ suicidal ideations and attempts beyond the boundaries of culture by highlighting how young Latinas are connecting the dots between their psychological pain and the social environment, while they are constructing their multiple, shifting and conflicting identities.

Welcome to my site!!!